The National World War II Museum tells the story of the American Experience in the war that changed the world – why it was fought, how it was won, and what it means today – so that all generations will understand the price of freedom and be inspired by what they learn.

In December, we announced a partnership with the museum as part of our Living Legacy Initiative, which is our company’s philanthropic commitment to help preserve cultural and historical information, artifacts and treasures. Our support includes a financial contribution to the museum to underwrite the digital publication veterans’ oral histories from the Pacific Theater, as well as store documents in the New Orleans, LA facility and store the tapes of noted author and co-founder Stephen Ambrose in the Underground in Boyers, PA.

On Tuesday, March 1, more than 100 customers attended a unique opportunity at the museum to learn about our community engagement and the museum’s own history, exhibits and vision for educating the future. Co-founder and current CEO Dr. Gordon “Nick” Mueller told the guests that he and Stephen started discussing their dream of having a D-Day museum from their backyard gazebo while they were both history professors at the University of New Orleans 40 years ago.

Today, that dream has developed into a six-acre campus with multiple buildings and exhibits hosting an extensive collection of artifacts and first-person oral histories. It’s also designated by Congress as the official WWII museum of the United States and its online collections offer patrons new ways to connect to history and honor the generation that sacrificed so much to secure our freedom.

“Our company’s Living Legacy Initiative lends our resources and expertise to nonprofit partners who want to protect historical and cultural assets,” said, Ty Ondatje, SVP Corporate Responsibility and Chief Diversity Officer. “Our partnership with the WWII Museum is a wonderful way to ensure that the stories of our World War II veterans are not lost with their passing and helps recognize the bravery of our servicemen and women.”

The program included a special opportunity to hear from a veteran whose account is part of the museum’s “Road to Tokyo” exhibit. Ninety-two year old Corporal (ret.) Hershel “Woody” Williams from the United States Marine Corps was in attendance to speak about his experiences and his designation as a Medal of Honor recipient for his actions at Iwo Jima. Woody’s remarks paid homage to honoring the men and women who gave their life in battle.

To learn about Woody’s heroism from his own oral history, click here.

“We were in the presence of an American hero. Twenty-seven Medals of Honor – our country’s highest military award for bravery – were awarded for action at Iwo Jima which is more than any other battle in U.S. history,” said Steve Kowalkoski, Territory Vice President and TGM of the Gulf/Lakes. “We chose this week to have the customer event in reference to the historic flag-raising on Iwo Jima at Mt. Suribachi on February 23, 1945. Our customers and colleagues were honored to meet and learn from Woody at the National WWII Museum.” 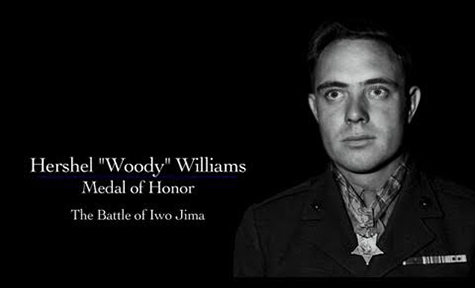